The following story was written by Ty Burke, with photos by Chris Roussakis 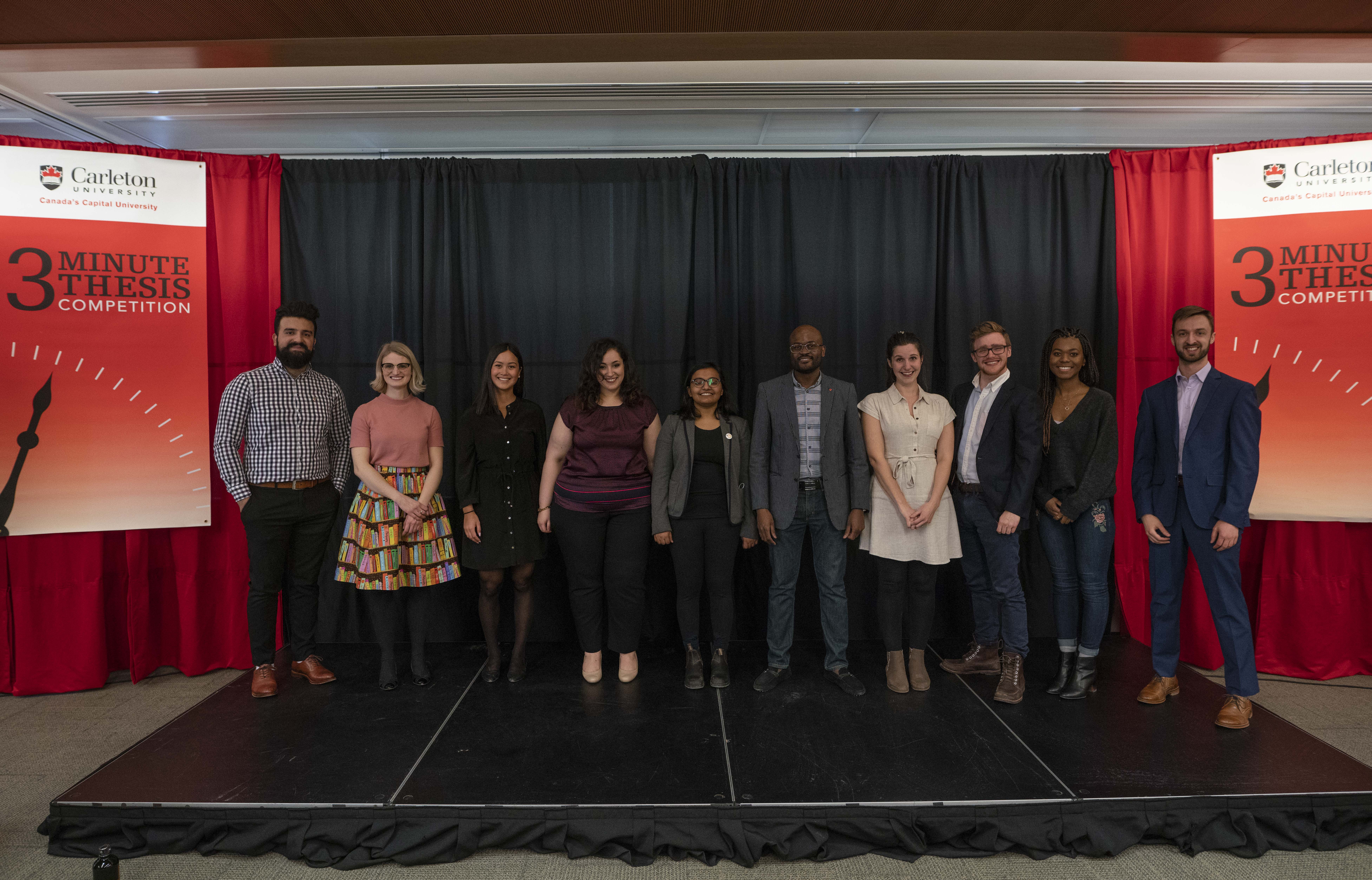 Hundreds of hours of reading, thousands of words typed . . . then revised, and then typed again.

The 3-Minute Thesis (3MT) competition originated at Australia’s University of Queensland in 2008, but it has long since gone global. The academic research communications competition presents graduate students with a daunting task: distill your dissertation, thesis or Master’s research project into a short presentation that can be digested by a non-specialist audience. Oh, and one more thing . . . you only get one PowerPoint slide to illustrate the concepts.

This year, Carleton staged its seventh annual 3MT on March 13 at Richcraft Hall. Melody Gavel took home the top prize for a presentation that linked the impact of insecticides on frogs with a potential increase in mosquito-borne illnesses.

Jean-Daniel Medjo Me Biomo captured second place for his work on routing protocols for networks of drones that could make search and rescue missions more efficient, and Aditi Singh won third with her research into how ambient notification systems can help ensure that those suffering from repetitive strain injuries take the breaks their physiotherapists recommend.

“3MT challenges graduate students to think about their research in a different way,” says David Lafferty, Coordinator of Graduate Professional Development with Carleton’s Faculty of Graduate and Postdoctoral Affairs.

“Academic work is often focused on critical analysis and methodical investigation within a particular discipline. The 3MT requires that students engage with people outside their discipline. All three winners made their research comprehensible and engaging to a non-specialist audience. That’s a very difficult thing to achieve.” 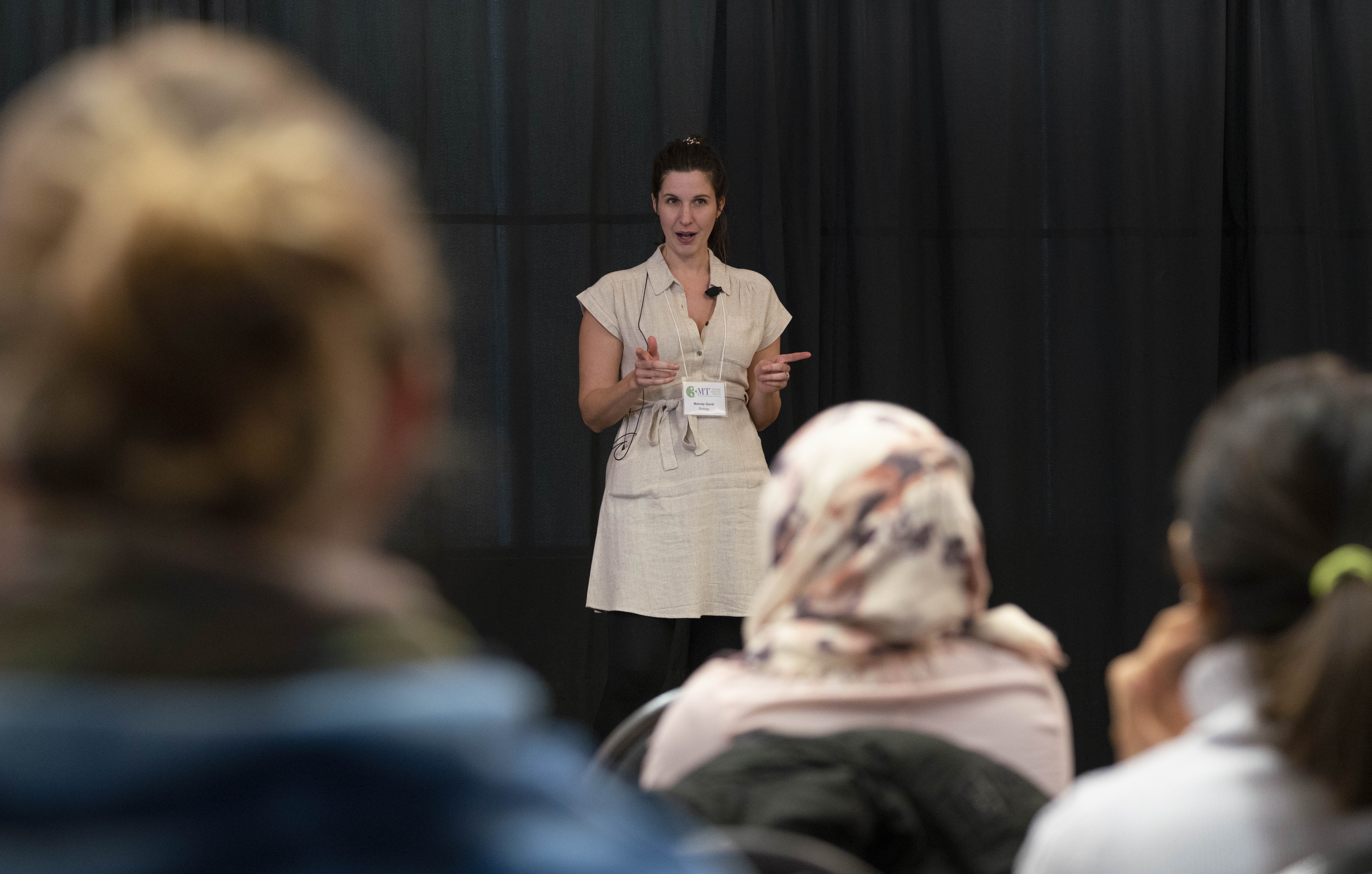 Collapsing pollinator populations threaten the viability of crops we rely on to sustain civilization. An exhaustion of insect-devouring amphibians could lead to an increase in mosquito-borne diseases like malaria.

The side effects of neonicotinoids are positively apocalyptic in tone, but simply put, this class of widely-used insecticides pose threats to species they aren’t intended to target, like bees and frogs.

When Melody Gavel began her Master’s studies, she noticed a series of glass slides in a lab that hadn’t yet been studied for frog stress responses. They were smeared with the blood of amphibians exposed to neonicotinoids, and Gavel noticed something wasn’t quite right.

“If you look at frogs exposed to neonicotinoids, you wouldn’t think there’s anything wrong with them,” says Gavel, who won first place ($1000), the People’s Choice Award ($250), and a trip to represent Carleton at the 3MT Ontario provincial competition at McMaster University in Hamilton on April 17.

“They look healthy, but if you looked at the blood smears in more detail, there were a few bad things going on. They were stressed. When a frog becomes stressed they produce more neutrophils and less lymphocytes – both types of white blood cells. Normally, this indicates a more stressed frog.”

Gavel hypothesized that stressed frogs would be more susceptible to disease, and her research exposes tadpoles to varying concentrations of insecticides, and to commonly occurring parasites. She measures their white and red blood cell counts, and photographs the frogs to catalog if their morphology was impacted.

“I want to see how big they are, whether they survived, what stage of development they reached.”

Gavel’s winning presentation placed the impacts of neonicotinoids in the context of mosquito-borne illnesses as a way of helping the audience connect with an animal that isn’t the most relatable.

“Frogs are not the most charismatic species — they’re not pandas,” Gavel says.

“So, I researched what they provide to us. I noted how often we have to feed them insects and got to thinking of what else they eat. I found papers that showed they’re eating mosquitoes and larvae. If we were to lose all the frogs, you’ve got to think that something as simple each frog eating a few mosquitoes per day is going to add up. And what does that mean in terms of disease? Mosquito-borne illness isn’t central to my research, but it’s a good way to get people’s attention, because frogs do matter.” 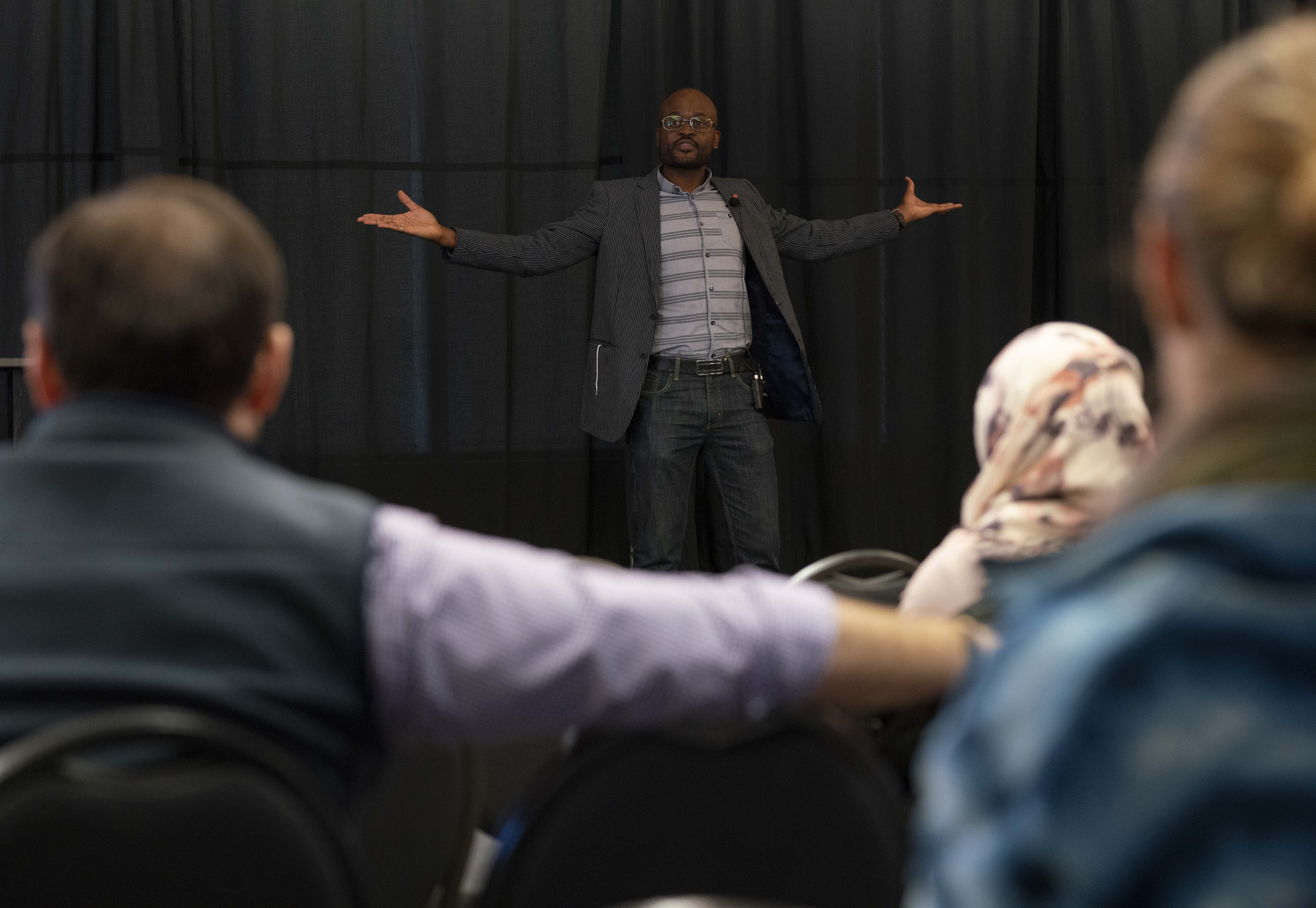 When you’re in need of Search and Rescue resources, time is of the essence. That’s true everywhere, but perhaps especially in Canada, where symptoms of hypothermia can set in after just a few hours during the winter months.

Canada’s aerial search and rescue operations have traditionally relied on fixed-wing aircraft and specially-equipped helicopters to locate those in need. More recently, unmanned aerial vehicles – drones – have been added to the mix.

Currently, each drone operates individually, but enabling drones to transmit information to each other could dramatically improve the area they’re able to survey. Jean-Daniel Medjo Me Biomo is developing the routing protocols to do exactly that.

“Instead of using one drone — or using a bunch of drones individually — we could actually deploy them together to work as a team,” says Medjo Me Biomo, who took home second prize ($500).

Each drone would be equipped to transmit, receive and process data. They would communicate directly with each other, relaying data such as photographs or video through the network, and back to an operations centre, where imagery could be reviewed – and the location of missing people more quickly identified.

But drones can move rapidly and their transmission range is limited, so data needs to be routed through a network that is constantly in flux.

“I’m working with a transmission range of 1000 metres,” says Medjo Me Biomo.

“But in real life it will be shorter than that, maybe just a couple of hundred metres. The idea is that to be able to communicate over, let’s say, 2 km, I will not be able to send information directly. It’s too far.”

That’s where routing protocols come in. Drones in the network share location data with each other, which is processed by an algorithm in each drone’s onboard computer, enabling data to be transmitted through a network that is dynamic.

And by communicating directly with each other, instead of with a central antenna or tower, networked drones promise to reduce latency.

“The timing of communications is very critical, especially for those kinds of missions where people are in danger,” says Medjo Me Biomo.

“There are two levels of delay or latency. One is the delay to find somebody using a network of drones, and the other is delay of the packets in the airborne network. Deploying the drones as a team takes care of the first delay. Ten drones that cooperate will cover a large area — and eventually find somebody lost in that area – much faster than a single drone or a couple of drones working individually. But in order for the teamwork to be conducted smoothly and efficiently, the delay of the data packets between the drones absolutely needs to be minimized.” 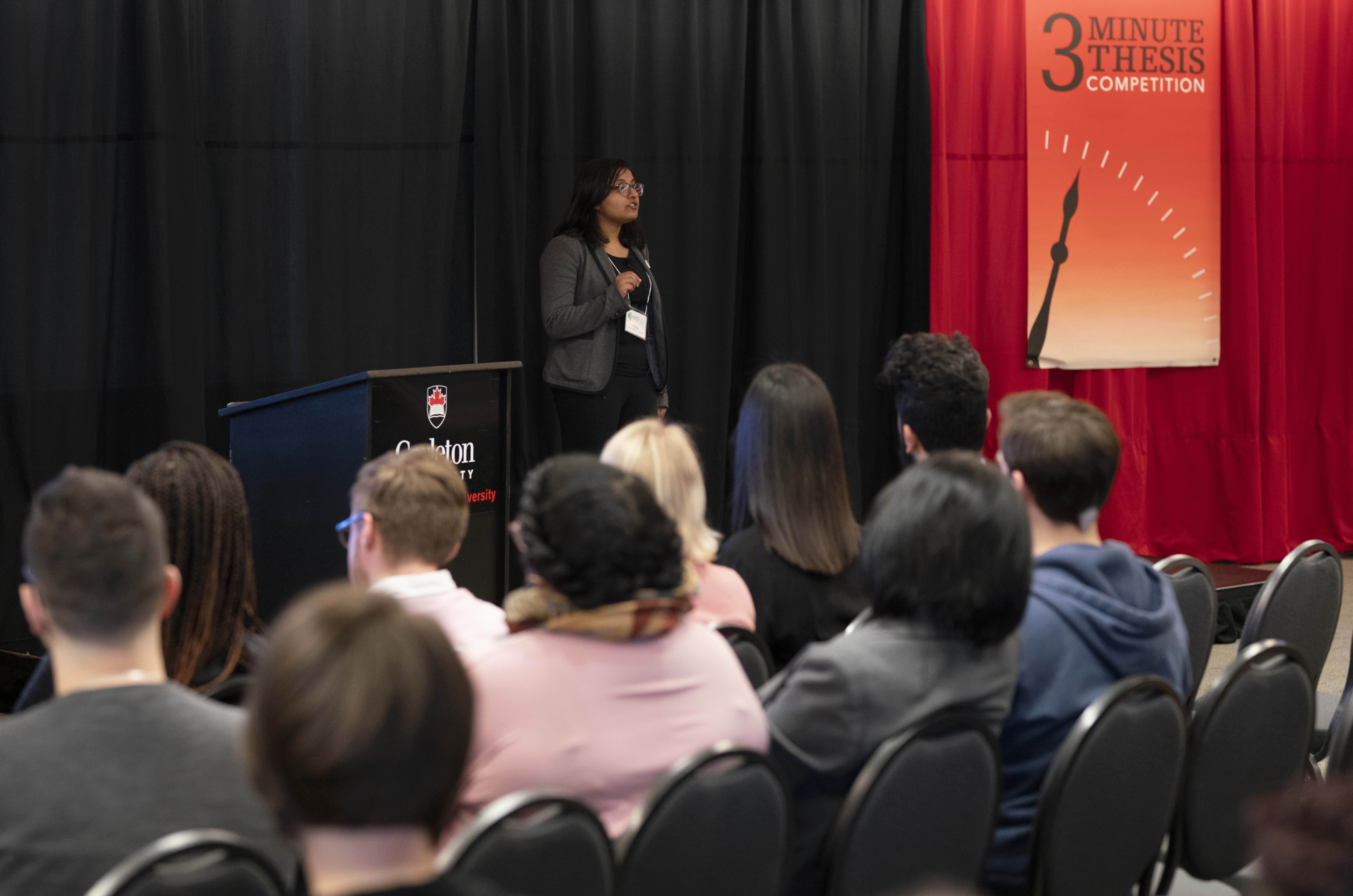 The human body didn’t evolve to sit in an office chair all day long — but that’s exactly how many modern office workers spend their day.

Sitting all day has been linked with repetitive strain injury (RSI), a potentially debilitating condition that can manifest as stiffness, throbbing or numbness, often in the wrists or neck.

To alleviate RSI, ergonomists and physiotherapists recommend taking short, frequent breaks, but many people don’t follow through when these breaks don’t fit with the demands of their workflow.

“Instead, people often use their body as a reminder,” says Aditi Singh, who won third prize ($250).

“When it begins to hurt, they realize that they should take a break, but by then it’s probably too late.”

Pop-up notifications and alarms are one way to remind people that it’s time to take a break, but these can interfere with work and are often ignored.

One alternative is ambient notification systems – physical objects in an office environment that indicate break-time by changing shape, or giving some other visible indication.  Singh’s research used a flower that senses motion, and wilts when it’s time to take a break.

“You choose to look at it; the information is available to you at your own disposal.”

Singh asked study participants describe their experience with the flower prototype, and also to critique the design and imagine what would make it work best for them. Even though the concept was novel to participants, her research found that this notification system would benefit from customization.

“I found very close relationships between with people’s personalities and the object. If someone liked nature, they were fine with the flower or talked about something as that was related to nature. But if someone was into animated cartoon characters they suggested a Pokémon for themselves. Another liked superheroes, so they wanted Superman to tell them to take a break rather than a flower. There was concern that if they didn’t relate to an object, they wouldn’t take a break because it is all about psychological effect on the person.” 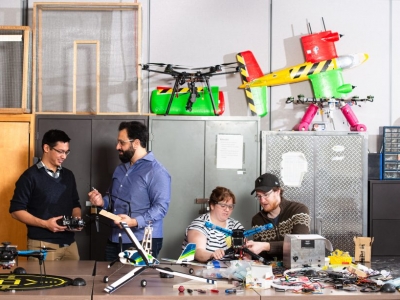 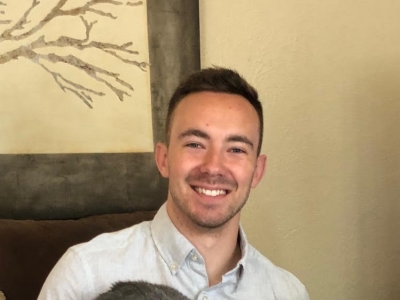 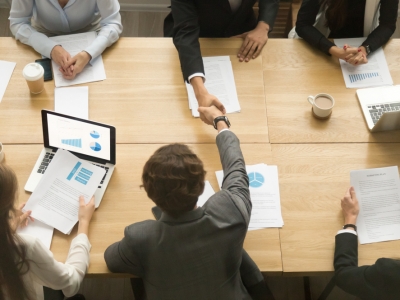 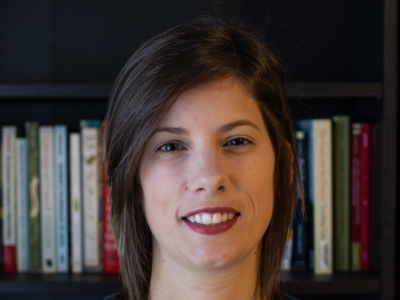